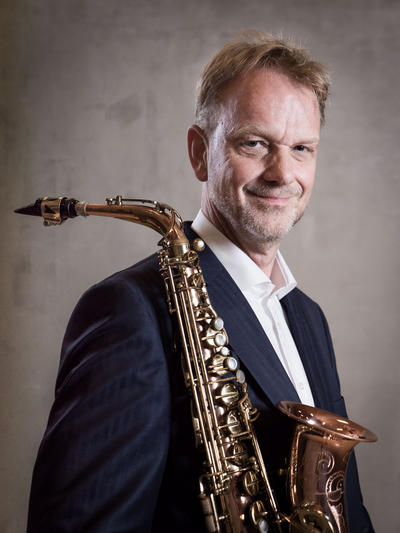 Arno Bornkamp is a Dutch classical saxophonist and virtuoso, who performs classic compositions as well as contemporary music. He was born in Amsterdam, the Netherlands, in 1959. The talented lyrical musician studied at the Sweelinck Conservatory in his hometown with another saxophonist Ed Bogaard as his tutor. Bornkamp graduated in 1986 with the highest distinction. Since then, he has won a variety of awards, which include the prestigious “Silver Laurel of the Concertgebouw” and the “Netherlands Music Prize”. Due to the latter, he got the opportunity to perform abroad. He studied in France with Daniël Deffayet and Jean-Marie Londeix as well as in Japan with Ryo Noda. Bornkamp also collaborated with Luciano Berio and Karlheinz Stockhausen among other composers.

Arno Bornkamp’s first solo concert was held in Rome in 1982 — he performed Jacques Ibert’s “Concertino da Camera”. Since then, the musician has played over 200 concerts with orchestras all over the world. They included the most famous works from the saxophone repertoire as well as compositions that were written specifically for him, including the “Tallahatchie Concerto” by Jacob TV. Bornkamp’s repertoire currently consists of such works as “Saxophone Concerti” by Joey Roukens and Carlos Michans and the “Trois Danses” by Frank Martin among other compositions. He performed the latter with the Scottish Chamber Orchestra at the XVI World Saxophone Congress in St. Andrews. In his career, he also got to work with Martijn Padding, Christian Lauba, Peter van Onna, Otto Ketting, Louis Andriessen, Jacob ter Veldhuis, Simon Burgers, Wijnand van Klaveren, Perry Goldstein, and many other legendary composers.

Arno is also very fond of chamber music, which is why he has been a member of the Aurelia Saxophone Quartet for over 35 years. The saxophonist also partnered with the pianist Ivo Janssen. They have released many albums together, such as “Saxophone Sonatas” (1989), “Hot Sonate” (1996), “Adolphe Sax revisited” (2001), and others. Bornkamp also became a member of a unique ensemble “Class Ensemble”, which consists of classical and jazz musicians.

Arno Bornkamp gives concerts, lectures, master classes and participates in festivals all over the world. He has visited various European countries, the USA, Japan, and South America.

Bornkamp has released a number of critically acclaimed albums since 1990. Some of them are dedicated to specific composers. Among such records is “Buku of Horn: Arno B. plays JacobTV”, which presents a musical portrait of a Dutch composer Jacob ter Veldhuis. Another example is Arno’s most recent record, released in 2012, “Frank Martin and the Saxophone”. In 2014, a new CD came out, which featured Arno Bornkamp and his longtime music partner Ivo Janssen performing music by Claude Debussy and Maurice Ravel.

Most recently the saxophonist created a new project called “Bach in Beeld” (“Bach in Images”). The project involves him playing arrangements of Bach’s solo works “The 2nd Suite for Cello”, “The Flute Partita”, and “The 2nd Violin Partita” using three different saxophones, and the performance is accompanied by images made by a video artist James Murray.

Bornkamp also organized SAX14, a grand multidisciplinary saxophone festival, which took place in Amsterdam in November 2014. It celebrated the 200th birthday of Adolphe Sax, the inventor of the saxophone.

Arno Bornkamp teaches international saxophone classes at the Conservatory of Amsterdam and various master classes in the summer.